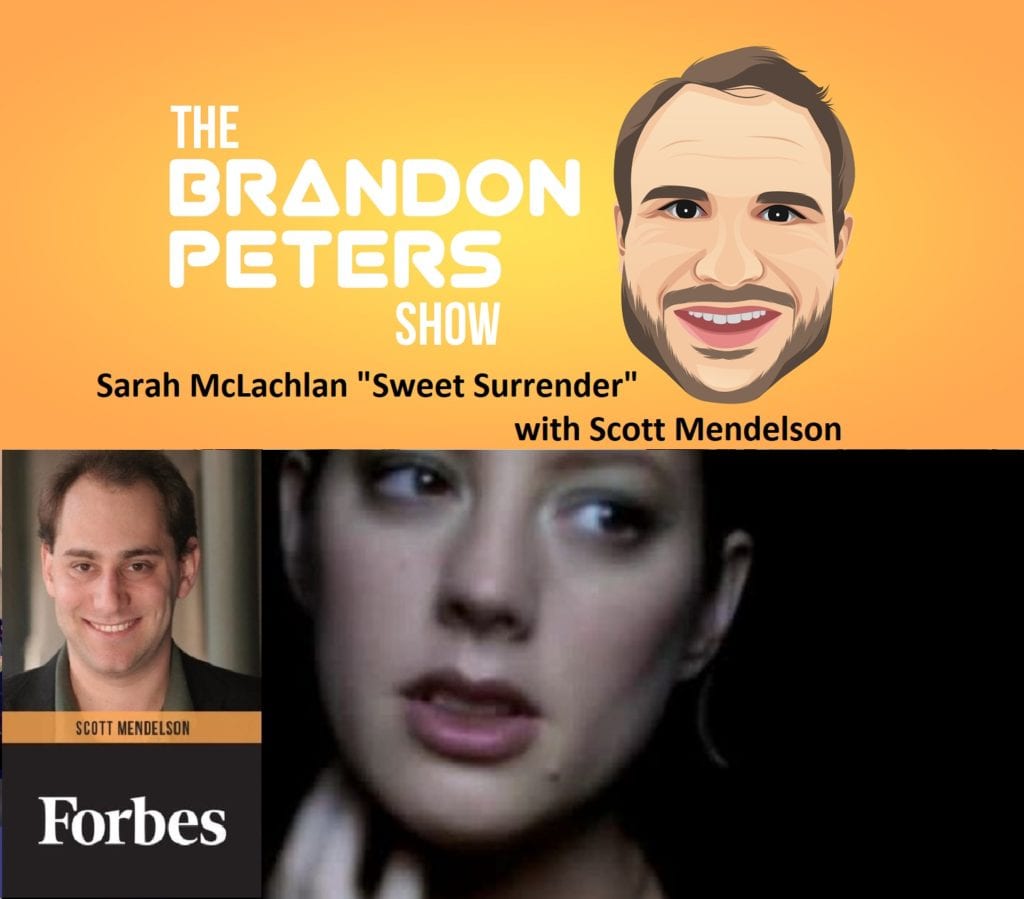 Here’s a little fun fact, returning guest Scott Mendelson is a big Sarah McLachlan fan! I specifically picked this week’s music video out with him in mind. And it was a more difficult task as Sarah McLachlan doesn’t quite sink her teeth into deep music videos too much. “Sweet Surrender” is easily her most interesting […] 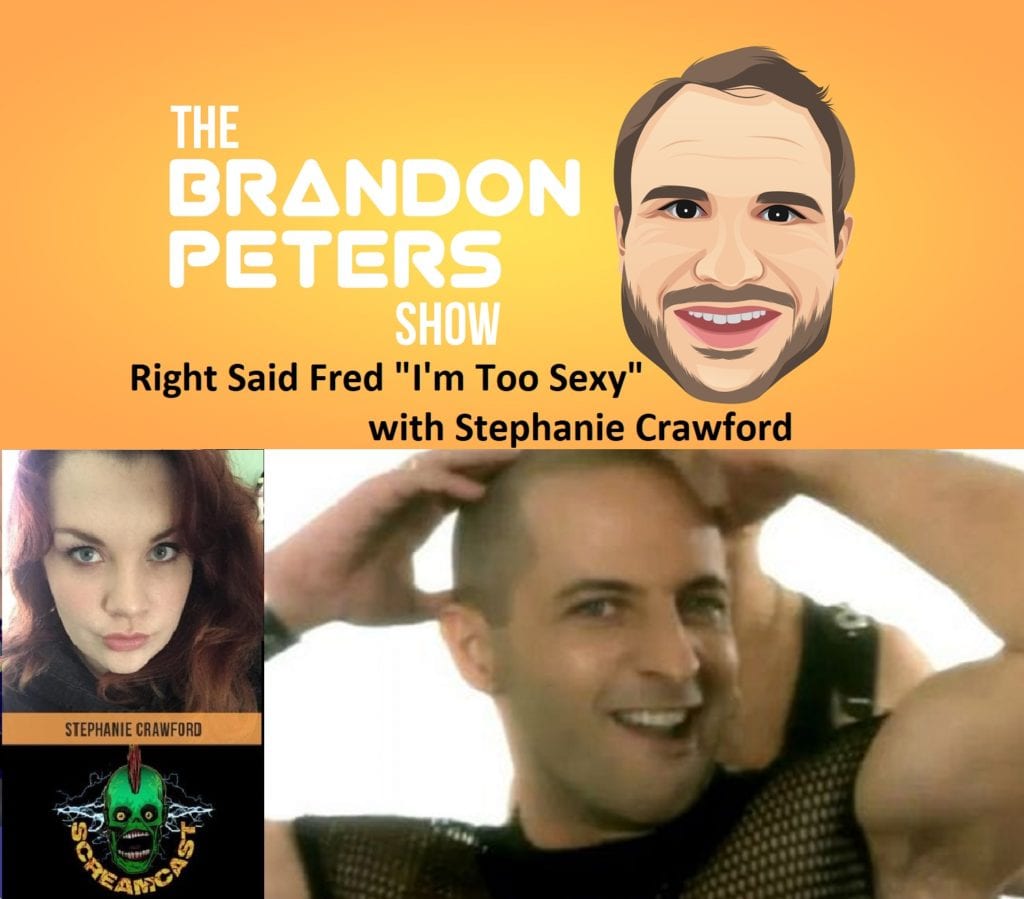 Yes. I’m going here. This is one of the staple songs from the 1990s. And one of the craziest and absurd songs to become a phenomenon. Everybody knows it. Everybody possibly knows where they were and what the first time they ever heard “I’m Too Sexy” by Right Said Fred. Stephanie Crawford returns and we […]

Closing With A Song “Shame” by Stabbing Westward with Reyna Cervantes 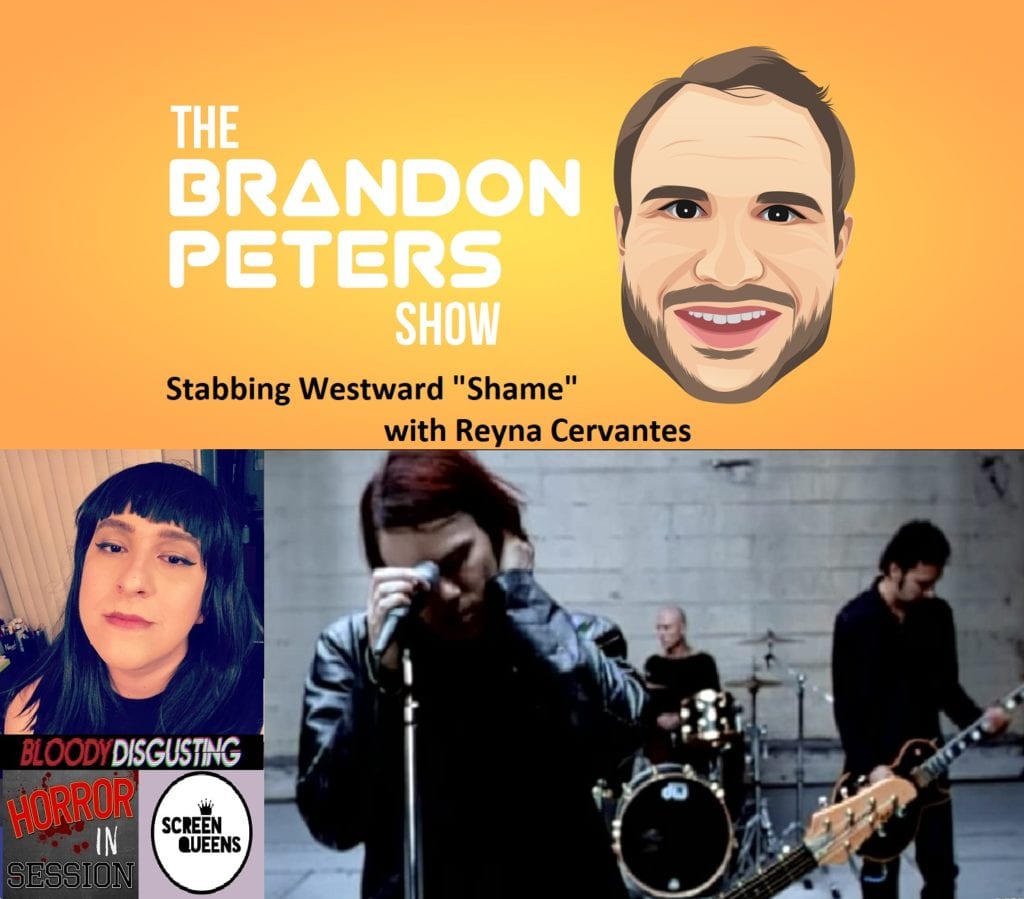 And we’ve gotten to a very “one for me” music video. I was pretty big on what is now an obscure 90s industrial band called Stabbing Westward. They had a sound that really lent it to sounding like the perfect music for movie trailers. Some of theirs would be. “Shame” is a really awesome music […]

Closing With A Song “Violet” by Hole with David Kronmiller 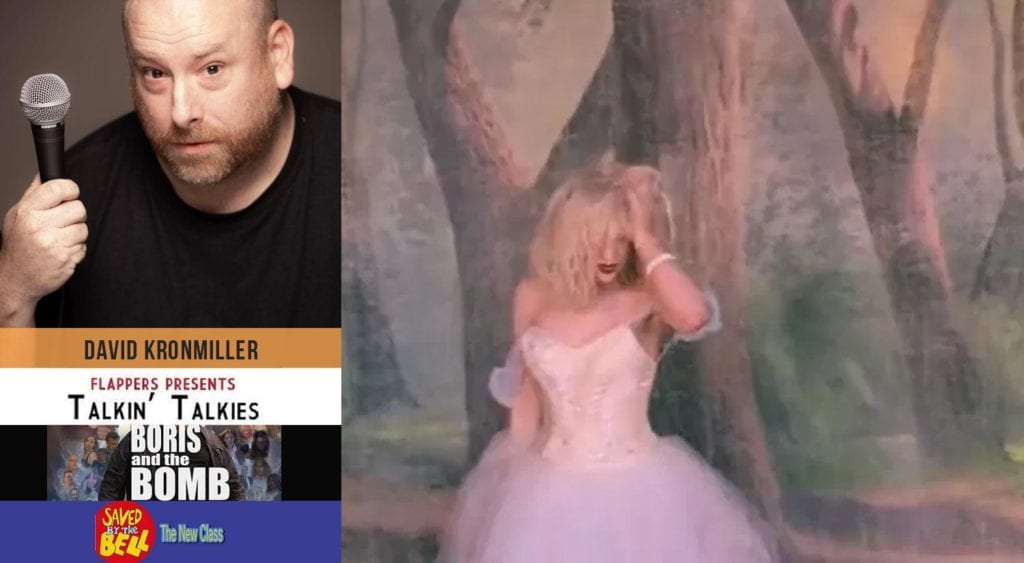 Time to talk some grunge! Courtney Love was a big figurehead of the female rock scene in the 1990s. A controversial one at that and had a legendary partnership with that of Kurt Cobain. “Violet” was the song that personally was my gateway into being a fan of her band Hole. David Kronmiller joins again […] 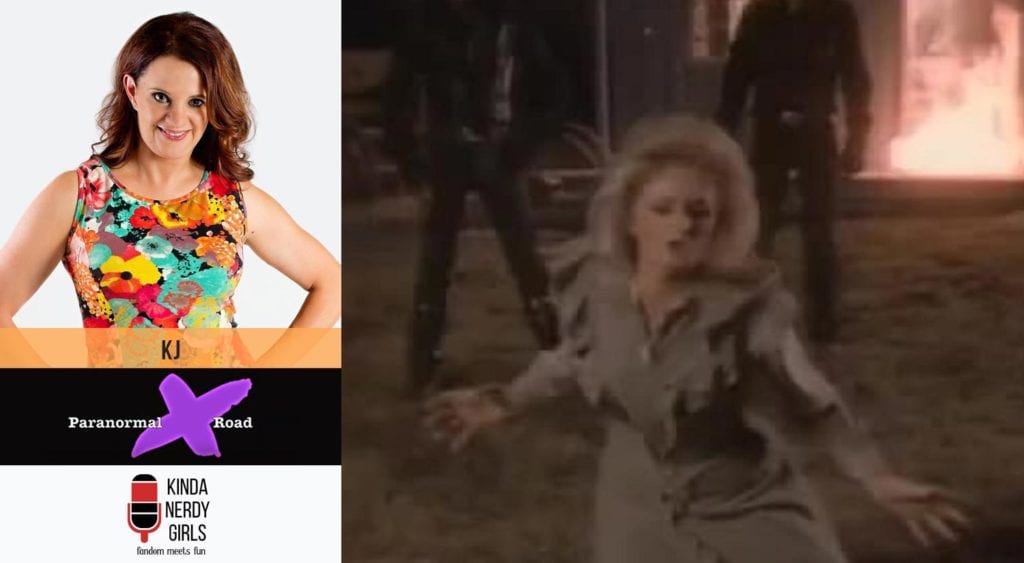 Aw, not “Total Eclipse of the Heart”, Brandon? We’ll get there, folks. Don’t work, this Bonnie Tyler video is equally weird, baffling and not what you’d expect when hearing the song or seeing how its been incorporated into movies. It has nothing to do with footloose and I’m not sure the old west comes to […]

Closing With A Song: “Intergalactic” by Beastie Boys 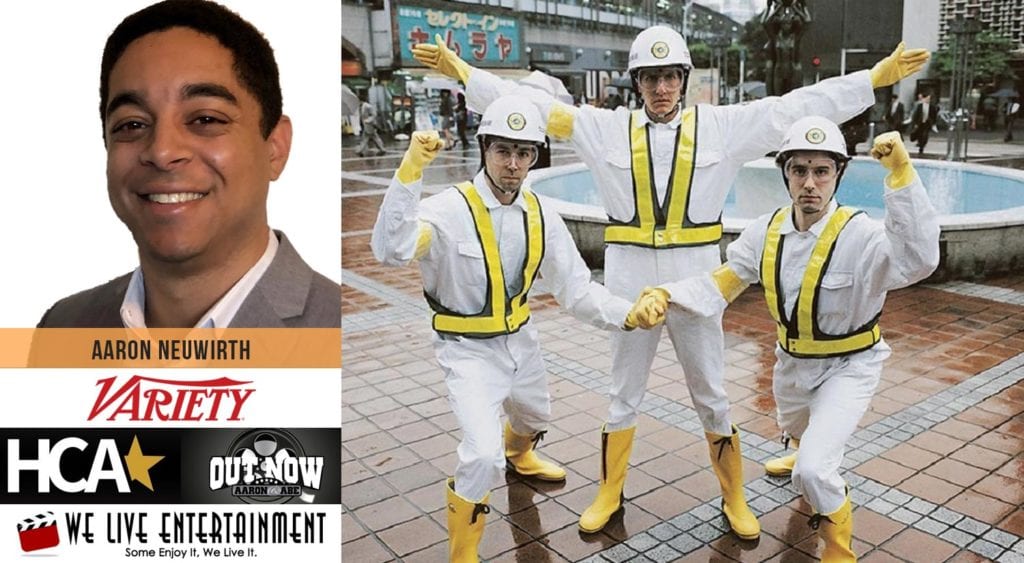 Cleansing my palate after countrying it up for a week, we spin right over to Beastie Boys. And what a perfect video to pair with doing a Godzilla movie on Monday than the Kaiju inspired “Intergalactic”. This video rules and we are here for every second of it. Aaron Neuwirth returns and is a huge […]

Closing With A Song: “The Thunder Rolls” by Garth Brooks 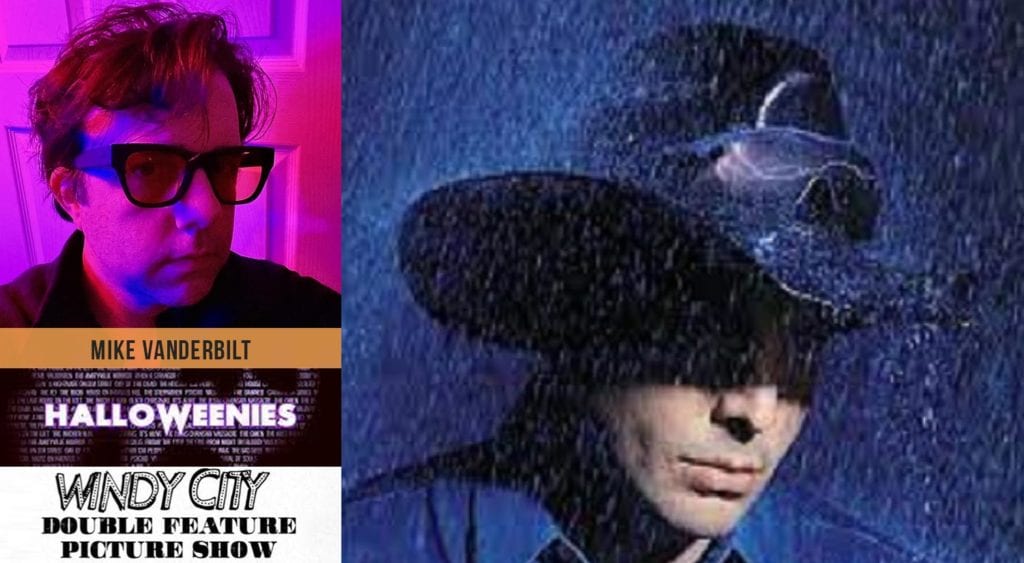 Yup, I’ve gone country! No need to discriminate. All genres made music videos good and bad. Garth Brooks was one of the biggest artists of the 90s and this might be his most significant contribution to the art form. I’d been holding on to this one until the right guest came around, and Mike Vanderbilt […]

Closing With A Song: “Love Is A Battlefield” by Pat Benatar 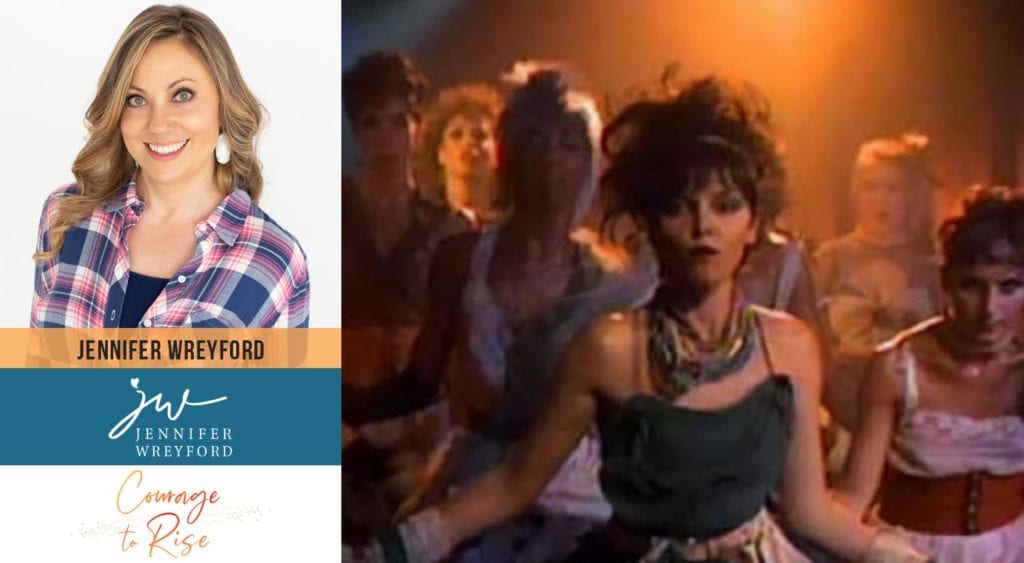 This felt like a good one to stick with Buffy. Pat Benatar herself was a badass and she also delivered a lot of pretty cool music videos. The pinnacle of them would be “Love Is A Battlefield”, easily. This one tells a story and has a bit of goofiness to it as well. Oh, and […]

Closing With A Song: “Shot In The Dark” by Ozzy Osbourne 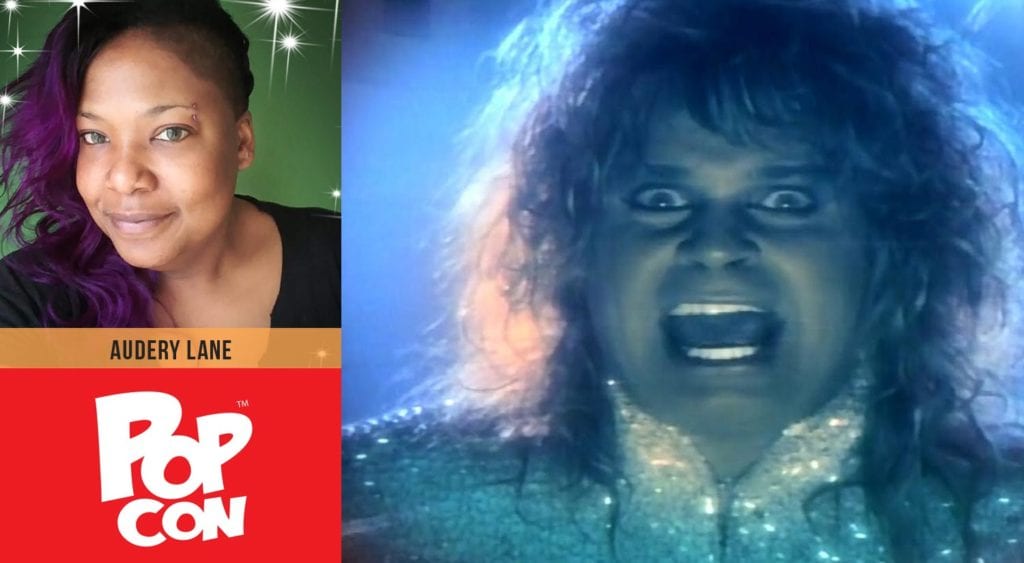 We haven’t really done much in the way of metal on the music video portion. So let’s go back and do some Ozzy Osbourne. “Shot In The Dark” comes from an album he’d rather soon forget, was that due to some legal issues regarding this song or just not enjoying it? We go over that […]

Closing With A Song: “Wannabe” by Spice Girls 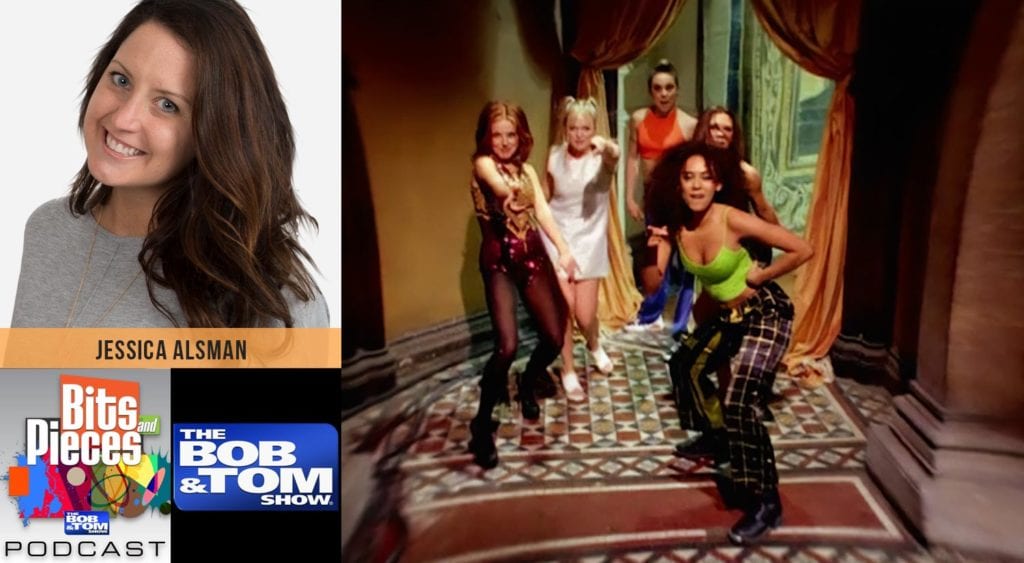 Spice Girls are finally here. Don’t say I don’t listen to my listeners. “Wannabe” has been one of my most requested music videos to do in the early life of this show. And I kind of waited until the perfect storm to unleash this classic. Jessica Alsman was ripe for Spice Mania growing up and […]

Closing With A Song: “Two Princes” by Spin Doctors 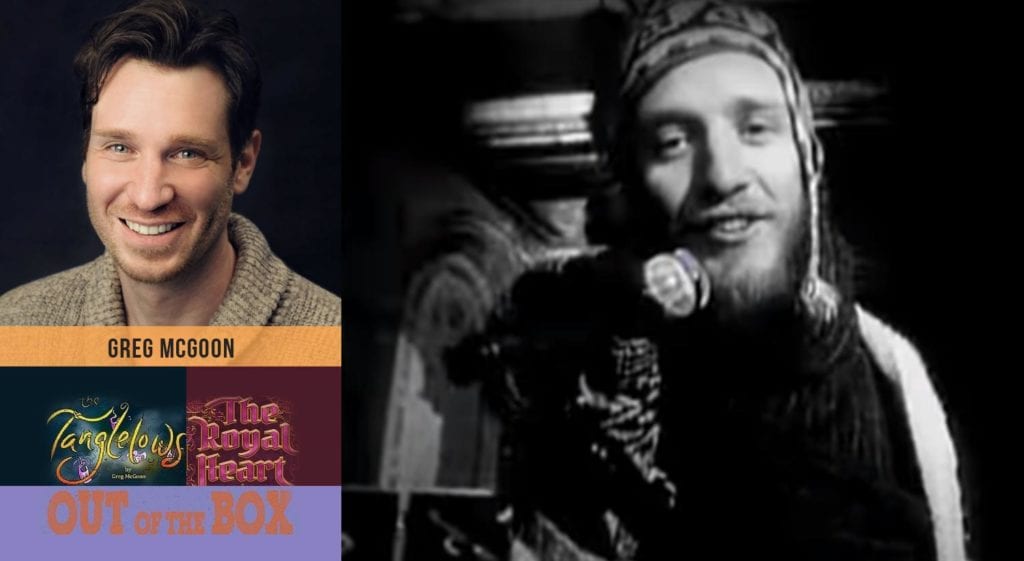 When “Two Princes” arrived, the Spin Doctors were huge. I was stunned in my research to see the album it was on went 5 times platinum. Insane to think, considering they fell off the map quickly after and became kind of a joke to people for a while after. Also, Two Princes = Two Videos. […]

Closing With A Song: “Angel of Mine” by Monica 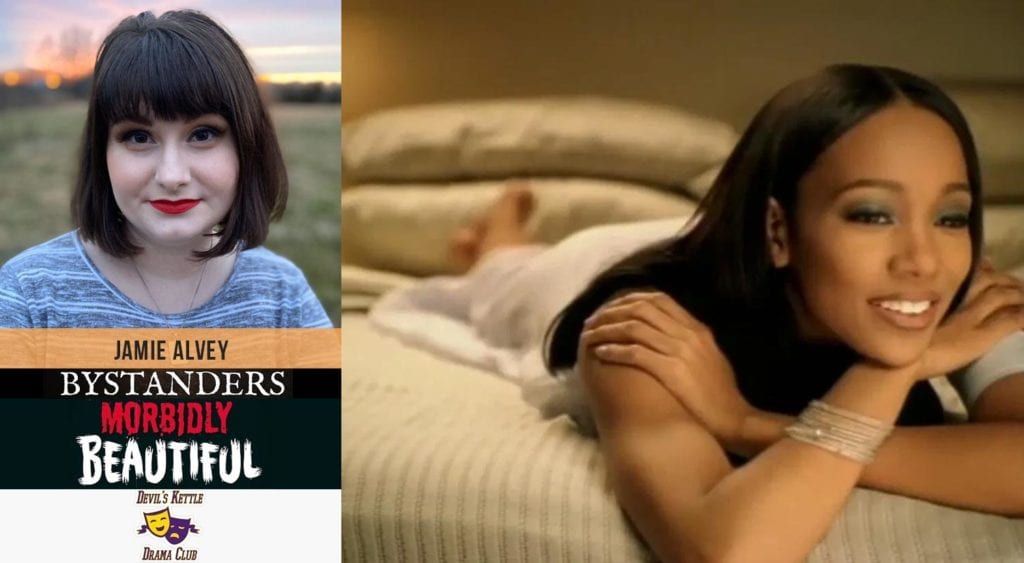 Monica had a huge record with her sophomore album “The Boy Is Mine” which led off on a big duet with her rival Brandy. The second single was, oddly as a I found out, a cover of “Angel of Mine”. It wasn’t a duet, but the video featured the up and coming singer/MTV VJ Tyrese […]

Closing With A Song: “Raspberry Beret” by Prince and the Revolution 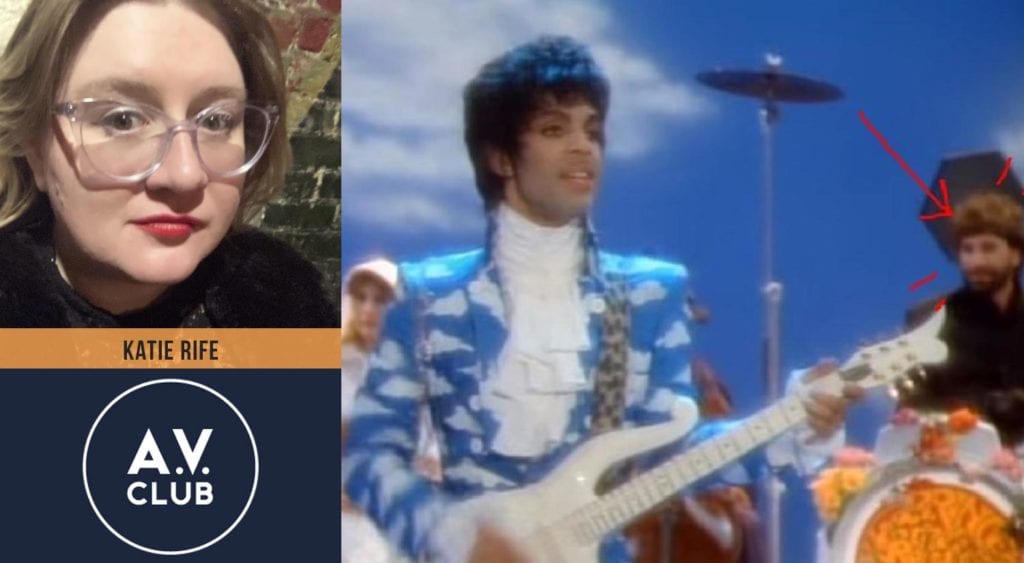 Time to finally get to some Prince here on the music video series. I decided to go with something somewhat whacky combined with just a damn fine song. “Raspberry Beret” was the first thing we received from him after “Purple Rain”. The video is very 1980s loud as well fun and eclectic. Returning to analyze […]

Closing With A Song: “Regulate” by Warren G & Nate Dogg 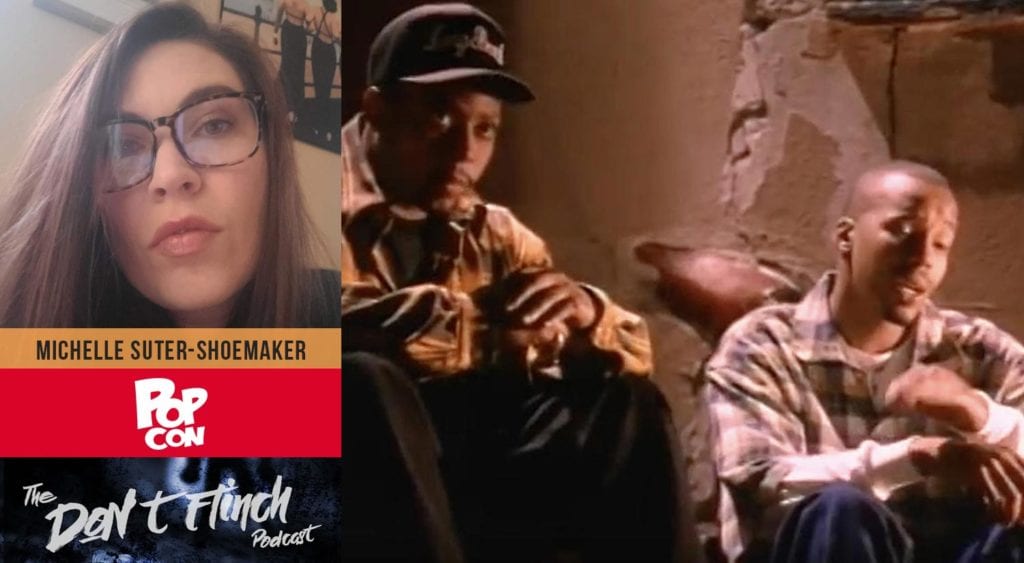 For this soundtrack week, why not one of the heaviest rotation videos from MTV, Warren G & Nate Dogg’s “Regulate”. It’s a song and video firmly stored in your brain forever. From the Above The Rim soundtrack, we were all tweaking into a whole new era. Step to this, I dare ya! Joining me for […]

Closing With A Song: “Ready Or Not” by The Fugees 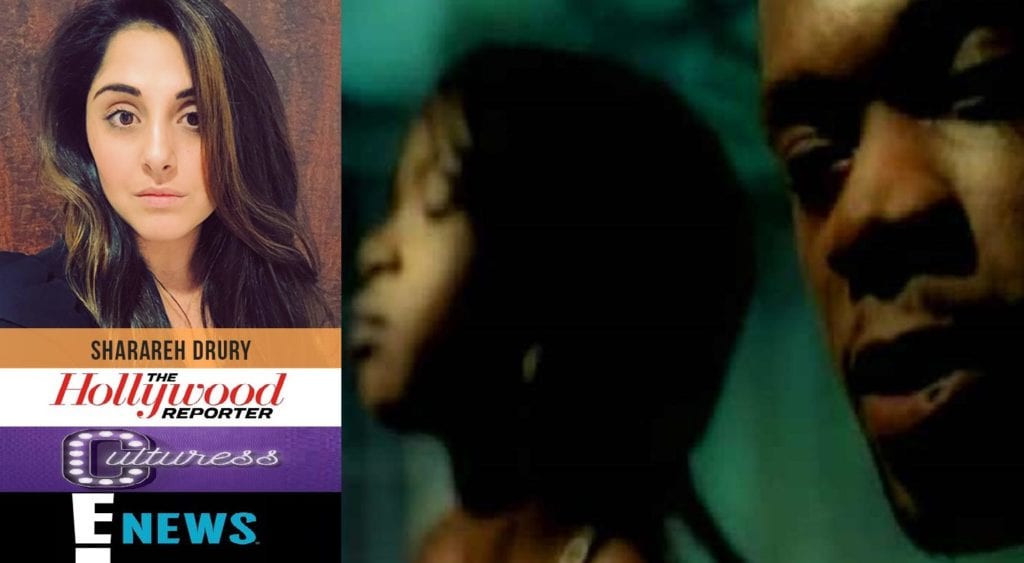 It feels as if right when The Fugees took off, they were no more. As a matter of fact that’s exactly how it played out. They all went solo. “Killing Me Softly” was a phenomenon, but the next music video was extremely influential on the hip hop music video world. “Ready or Not” had a […]

Closing With A Song: “Like A Virgin” by Madonna 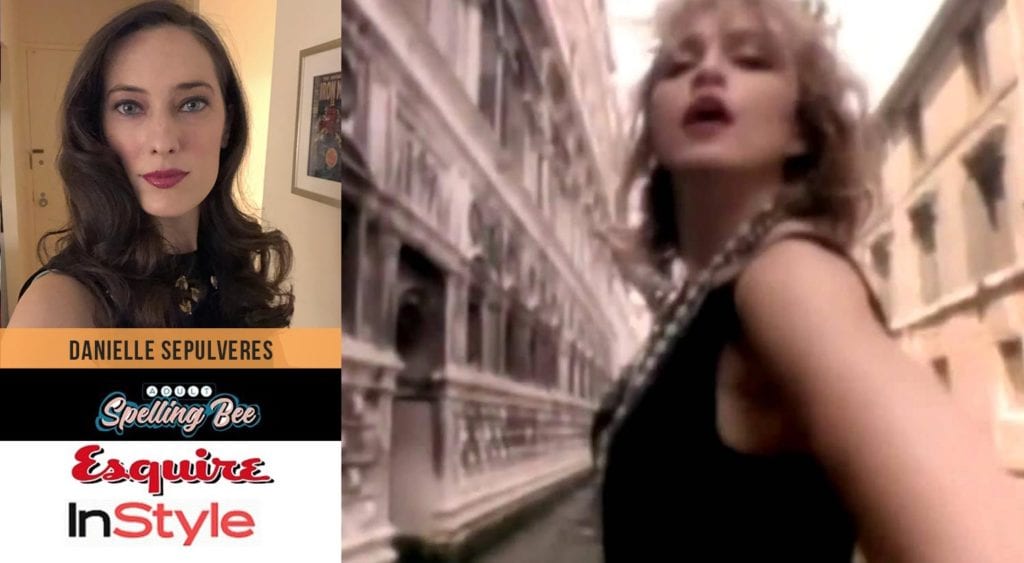 This is probably the biggest video by the biggest artist that’s been tackled here on The Brandon Peters Show. Madonna’s “Like a Virgin” is considered one of the greatest pop songs ever made and turned her and it into such an icon. I don’t think I really need to spill out details about it. Danielle […]

Closing With A Song: “Testify” by Rage Against The Machine 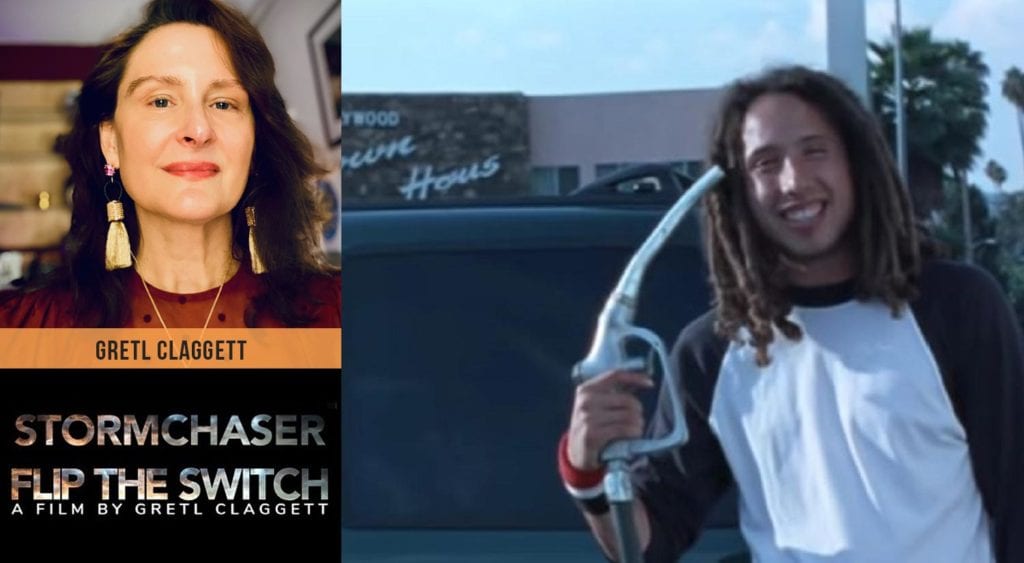 I’m not sure there’s been a more perfect pairing on a Friday Music Video episode than this one. It’s a very political week, we talked a political film, my guest is a political filmmaker…yeah, we are gonna do Rage Against The Machine. Returning is the director of Storm Chaser, Gretl Claggett. And wow, did this […]

Closing With A Song: “Block Rockin’ Beats” by The Chemical Brothers 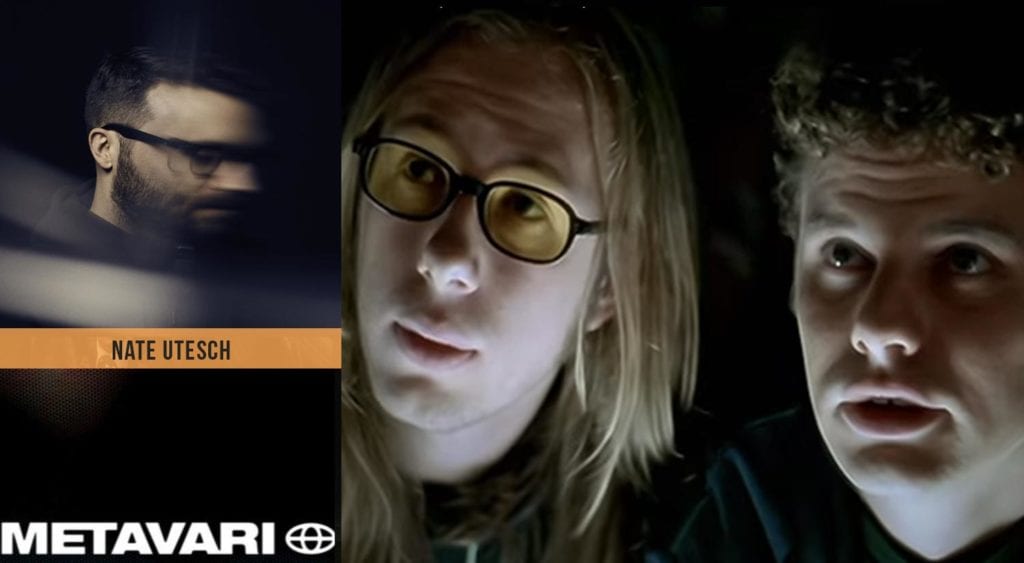 Closing with a Song “Last Christmas” by Wham 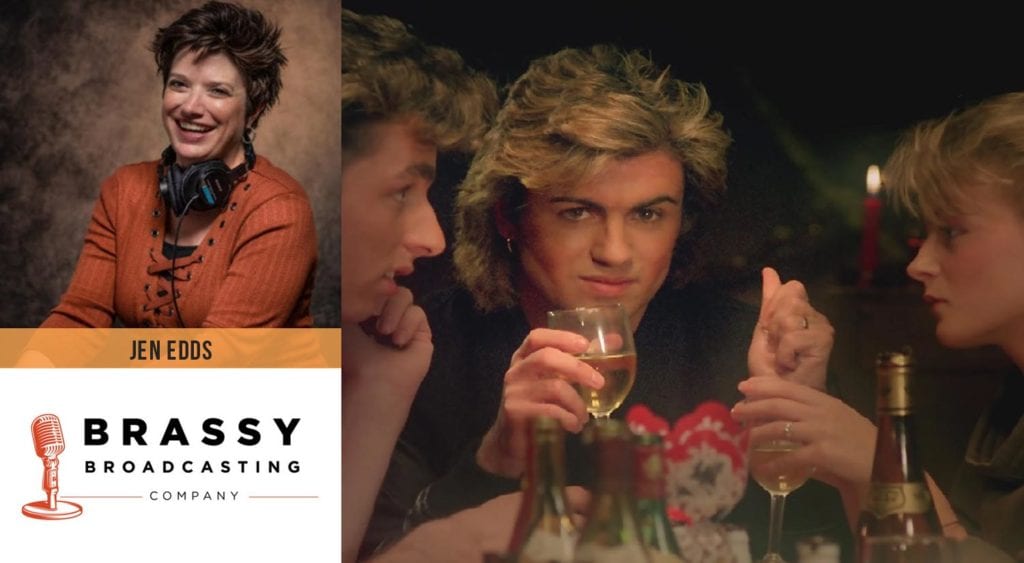 There was no way my new show’s first trip around the holidays wasn’t going to touch on Wham!’s “Last Christmas”. Quite possibly the most known Christmas song addition of the 1980s, it comes with a very 80s video companion. Returning is Jen Edds of The Brassy Broadcast Company. And oh my word, did we have […]

Closing With A Song: “I Think We’re Alone Now” by Tiffany 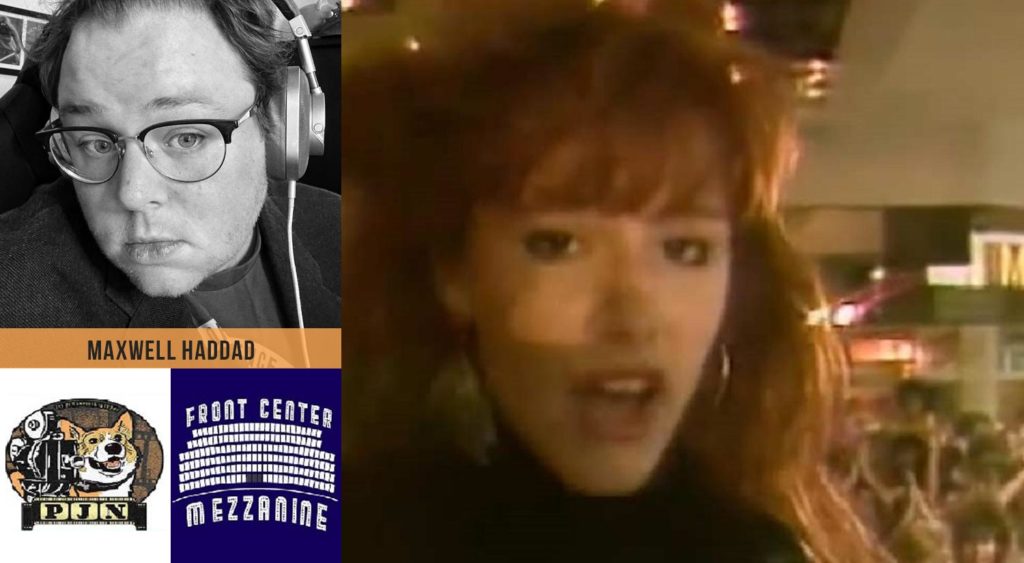 I absolutely adore Tiffany and this was the one that launched her to a rather short brush in mega stardom. This video is one of the most 80s of 80s things you’re ever going to see. Its legacy has long lasted too, even fully inspiring the Robin Sparkles material for How I Met Your Mother […]

Closing With A Song: “I Don’t Want To Wait” by Paula Cole 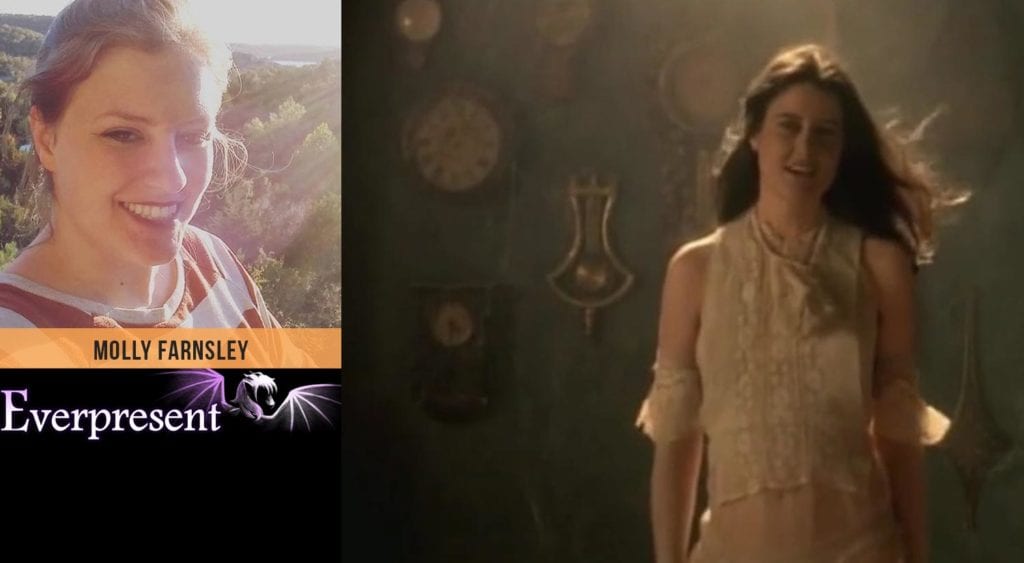 No, this has nothing to do with Secondhand Lions. It has everything to do with being random and having fun. Paula Cole’s hit “I Don’t Want To Wait” of course became immortalized when it became the opening title jingle for Dawson’s Creek in the 1990s. And yes, we talk about that plenty. Molly Farnsley, creator […]

Closing With A Song: “Ironic” by Alanis Morissette 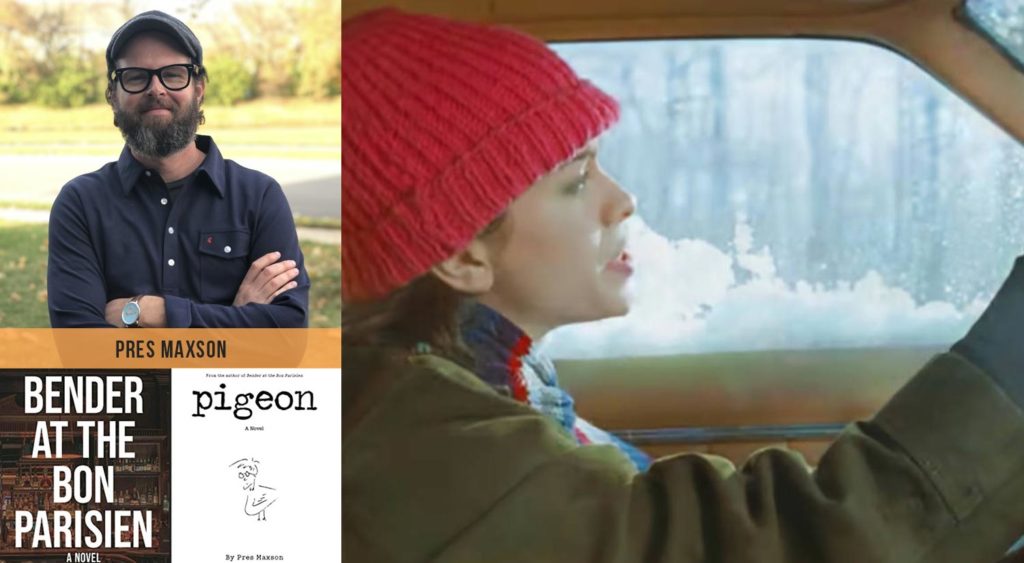 There were few (If any) bigger albums in the 1990s than Alanis Morissette’s juggernaut, Jagged Little Pill. Her single “Ironic” was also one of the most decorated and talked about videos from the album, having its share of Grammy appreciation and the all too sought after VMA accolades. “Ironic” found itself with heavy play and […]

Closing With A Song: “Heartbeat” by Don Johnson 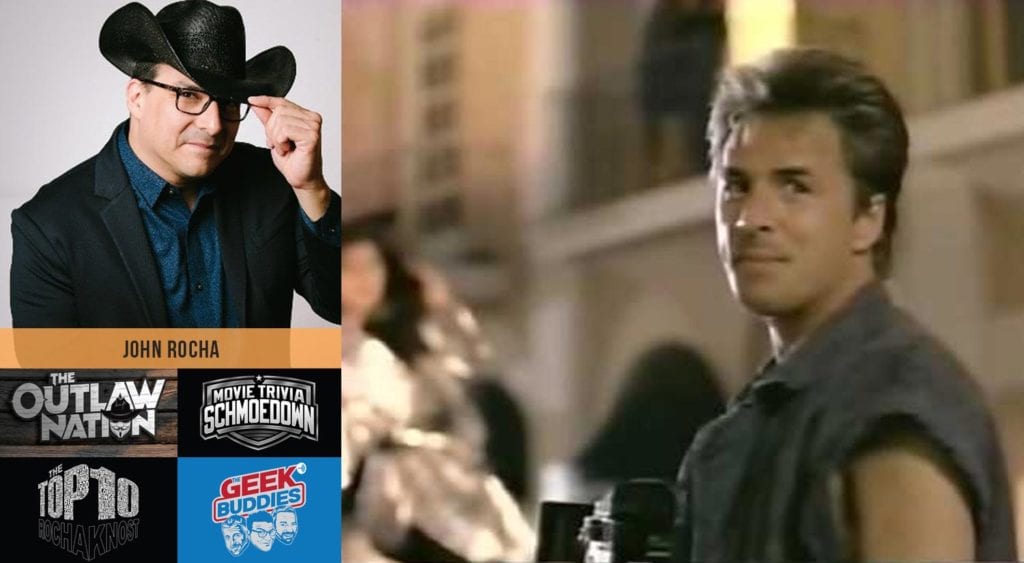 No, the song has nothing to do with The Good, The Bad and The Ugly. But, I wasn’t choosing any other video for my guest. Did you know during his Miami Vice years, Don Johnson recorded an album? Did you also know he made on of the most overdone, ridiculous music videos for it? If […]

Closing With A Song: “Whoomp! (There It Is)” by Tag Team 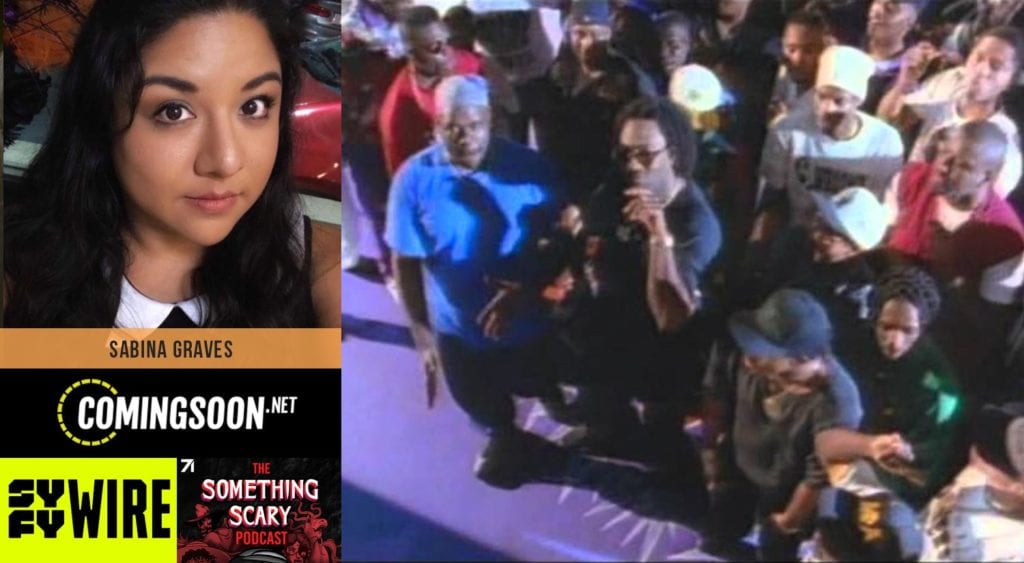 Taking the nation by storm in 1993 was “Whoomp! (There It Is)”. Still an arena staple for sports, Tag Team was truly one of the most One Hit Wonder of One Hit Wonders. Their only other notable song was a remix of “Whoomp!” for Addams Family Values as a replacement for a Michael Jackson song […]

Closing With A Song: “Living Dead Girl” by Rob Zombie 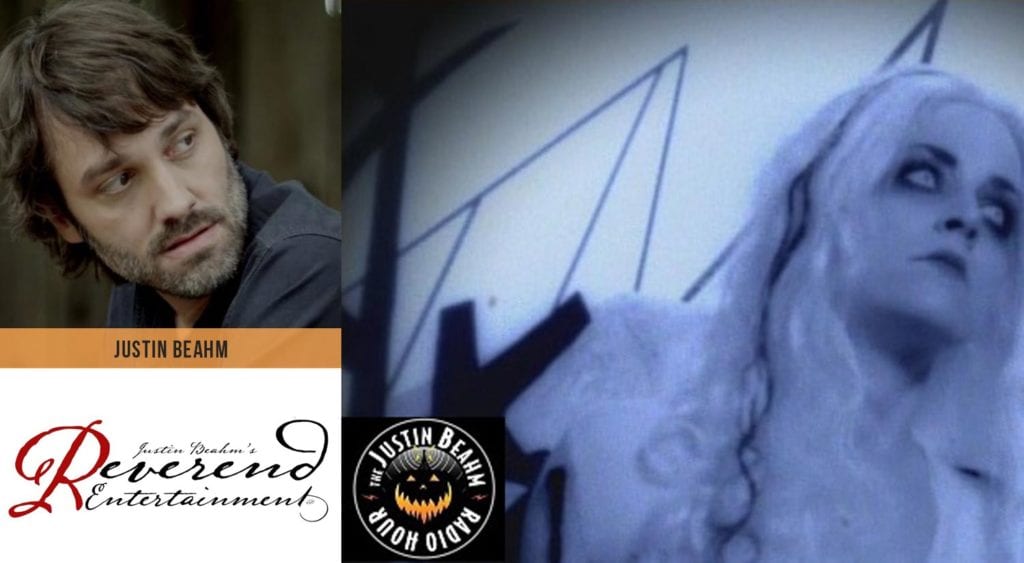 Halloween is upon us and what better music to celebrate with than Rob Zombie? I’ve long been a fan of his and no matter what, this time of year, Hellbilly Deluxe gets a spin in my car. For this week’s music video, I picked what is probably artistically my favorite of his in the Dr. […] 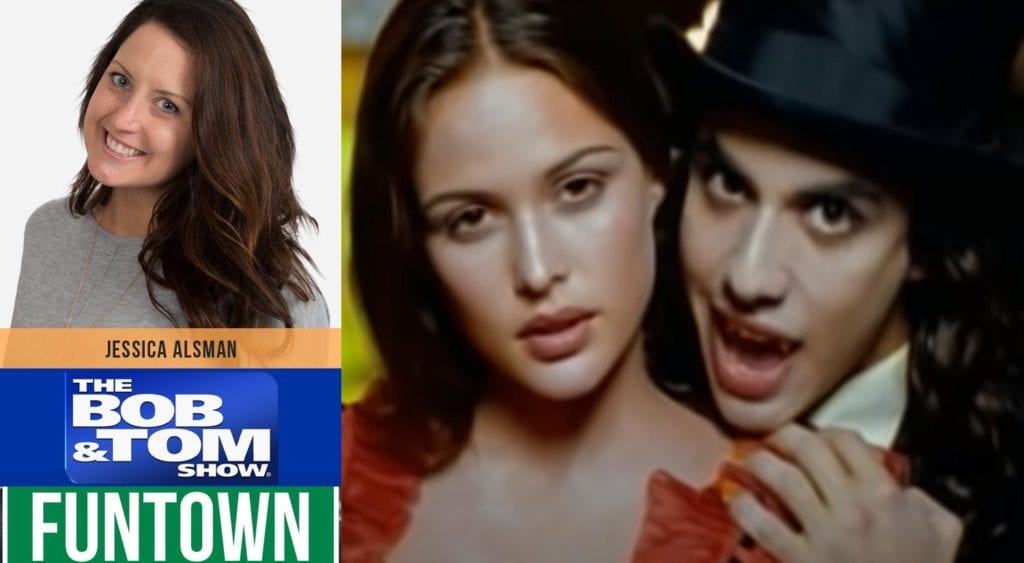 It’s that timeless combo of Classic Monsters and Boy Bands, right? One of the most popular boy band songs from the 1990s and videos was Backstreet Boys “Everybody (Backstreet’s Back)”. Stop trying to act too cool. You know it, I know it. It’s hard not to sing or move to it. We actually touched upon […]

Closing With A Song: “Hazard” by Richard Marx 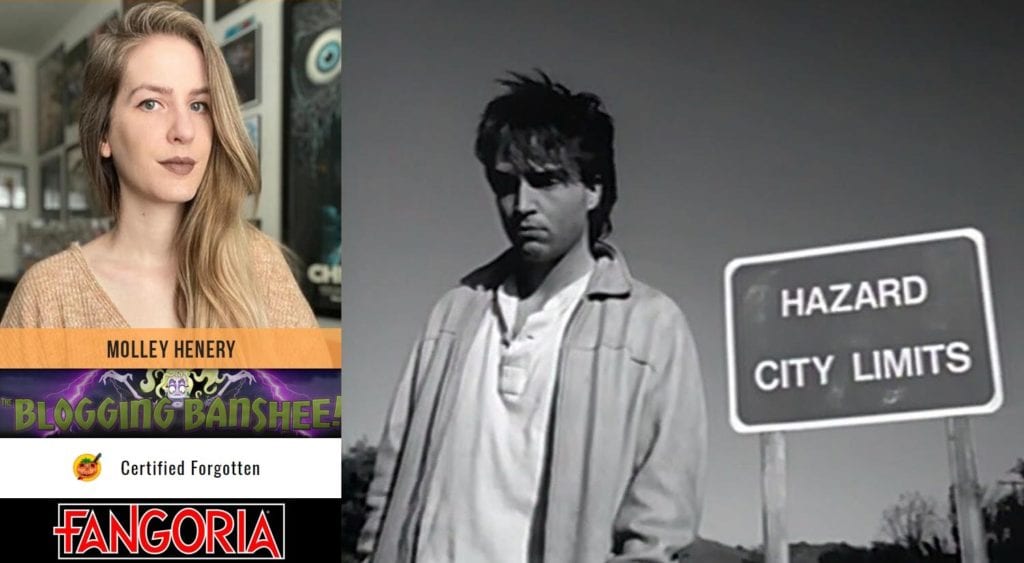 “Hazard” by Richard Marx is a music video that came to mind IMMEDIATELY upon the desire to do music video retrospectives as a part of this show. When this video came out, I was but 8 years old, but I found myself quite entrance by it and the pop culture phenomenon of the time of […]

Closing With A Song: “Doing It All For My Baby” by Huey Lewis & The News 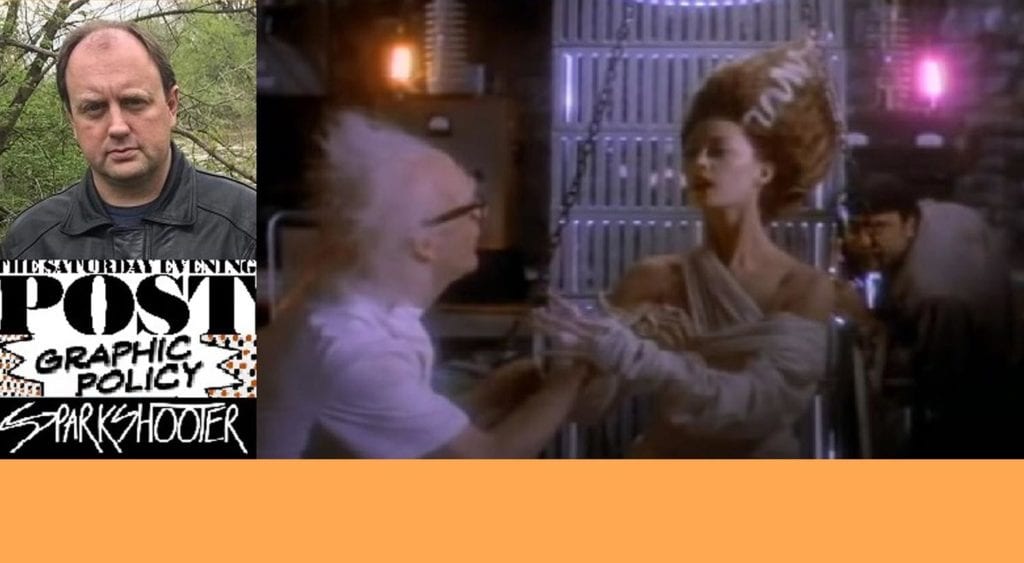 When it comes to the week of discussing Back To The Future, you surely discuss “The Power of Love” right? Nah. Check the video out for yourself, its kinda lame in terms of being a discussion starter. Instead, with it being October, let’s use this to shift our gears into a more horror-centric focus for […]

Closing With A Song: “Blister In The Sun” by The Violent Femmes 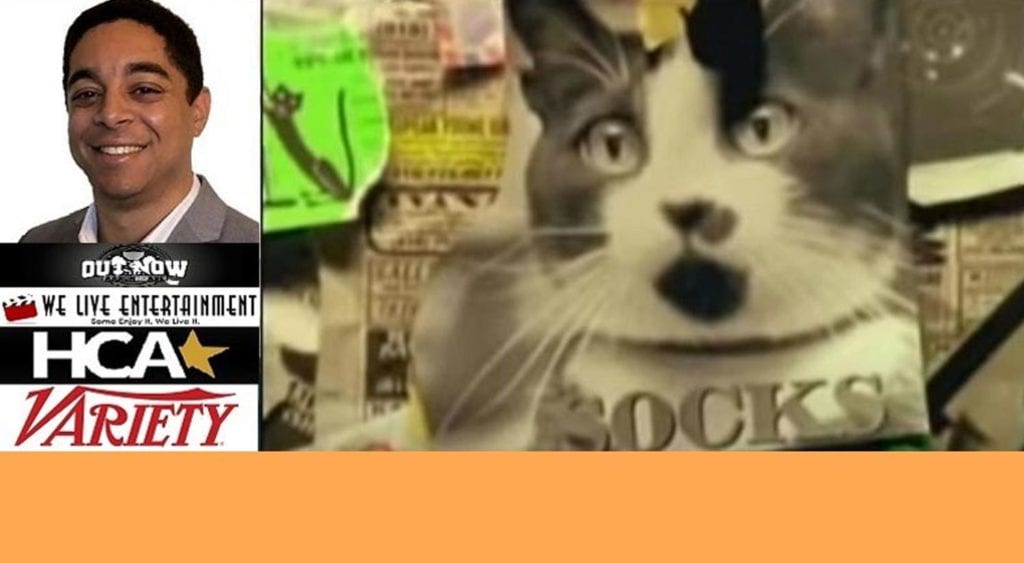 While it would be neat in most weeks to tie the Friday music video to the movie we’re discussing via the soundtrack, it doesn’t always work out so neatly. Many soundtrack videos consist mainly of clips from the film its supporting and nary a unique story to go with the music video. Luckily, with Grosse […]

Closing With A Song: “Opposites Attract” by Paula Abdul 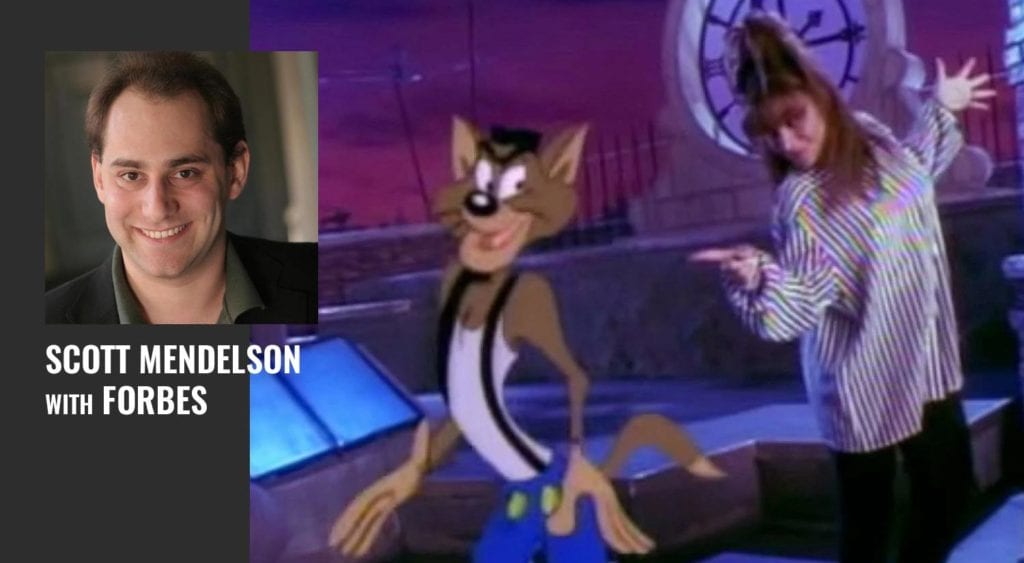 It feels right to close a weeklong show with a song before the curtain drops. I grew up in the 1980s and 1990s where music videos were a big part of pop culture. Going back and discussing these on a podcast has always been a curiosity of mine and now this show will have a […]